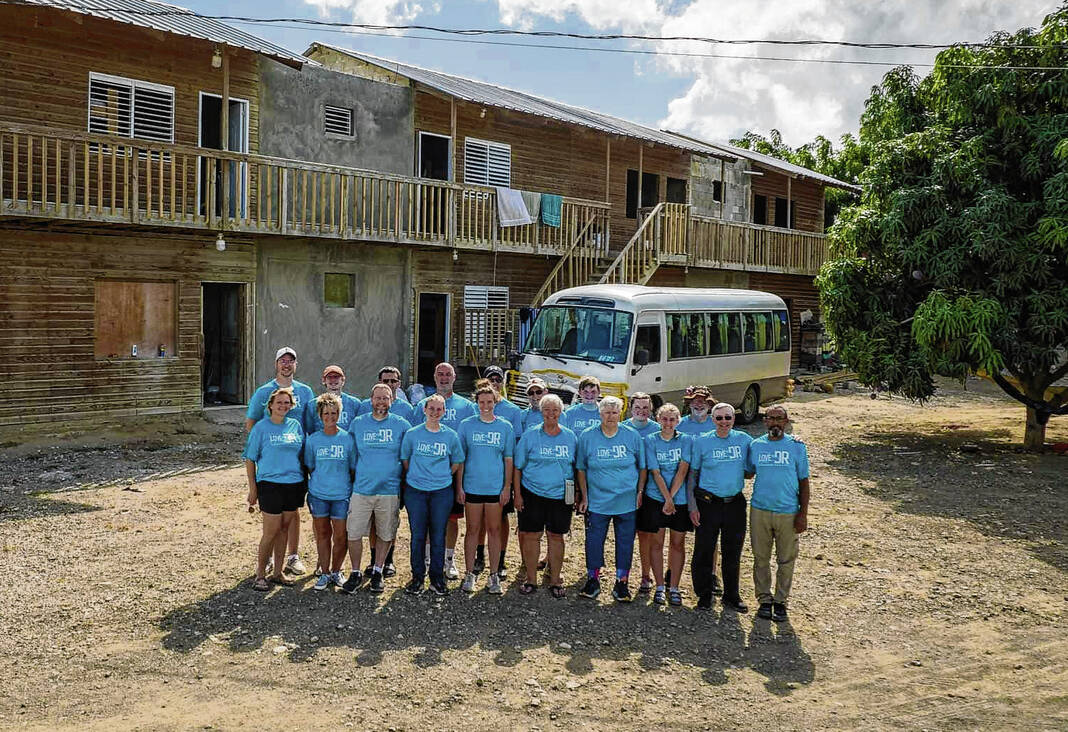 Of the many trips to the Dominican Republic over the years, the Seymour Christian Church has usually had a purpose.

Once is to do a construction project. Another time, it is to animate sports courses.

Sometimes it’s for adults only. Other times the trip is for the young.

When 18 people from Seymour Church went from July 16-23 of this year, it involved a mix of youth and adults, and there were four purposes: women’s conference, construction, church services and sports camps.

“It was the most aggressive we had ever planned,” associate pastor Dan Weaver said.

“We did more in seven days than we usually do in 10 days,” said founding member Donna Sullivan.

Although there was a lot of planning and a lot to do, Weaver was proud of what the group – which also included 13 members from Victory Christian Church in Franklin – accomplished.

“I’m very pleased that we did so much and made the best use of our time,” he said.

Weaver said his first trip to the Dominican Republic was in 1998, when he was working at another church, and his first trip with SCC was in 2005. His uncle told him about a missionary, Michell Marte, who had bought a banana plantation in Navarrete and turned it into a church camp.

SCC had not been to the Dominican Republic since 2019 due to the COVID-19 pandemic, so this year’s theme was “A New Beginning”.

Members led a two-day women’s conference that drew about 65 people, spent five days on construction and two days on sports camps, and led a Sunday service at one of Marte’s churches.

The construction included helping build the second floor of a school, adding a terrace on Marte’s apartment building/mission house, and building bunk beds and safety railings for the dorms.

CSC members Carter Murphy and Celeste Huddleston were part of the construction crew.

“I help my dad and grandfather in construction, so I felt like I would be good at that and could use the wisdom there,” said Murphy, 17, a high school student from Seymour.

Murphy said they created an assembly line to run cinder blocks up to the second floor of the school.

“There was a lot of teamwork, a lot of bonding that happened there,” said Huddleston, a 2021 SHS graduate who is entering her second year at Bellarmine University.

Marte’s mission house includes her living space on the second floor and an outdoor dining area and kitchen on the first floor.

A special moment during the trip was the dedication of Foster Kitchen, named in memory of CSC member Judd Foster, who died October 1, 2021. A Foster Kitchen sign featuring Foster’s photo from a past mission trip and Proverbs 11 :25 “A generous person will prosper; he who refreshes others will be refreshed” was placed on a wall.

“He was a special friend and a brother in Christ, and he was so special to my son. We just want to remember him,” Marte said at the inauguration ceremony.

Foster’s wife, Sophie, and children, Sami, 19, and Alex, 14, were there for the ceremony. This was Sophie’s second mission trip to the Dominican Republic, Sami’s third, and Alex’s first.

“These people loved my dad, and we got to hang out with them and share our love for him, so being able to do that was really, really cool,” Sami said. “It really meant a lot because my dad’s favorite thing was food, and he absolutely loved serving Dominicans, so to be able to dedicate the kitchen to him where his favorite thing came from was pretty neat.”

Sophi said they were greeted with warm hugs that were so heartfelt and sincere during the trip, and she was impressed with the amount of work SCC did.

Alex was too young to do previous mission trips, so Sophi was glad she had the chance to visit a third world country and see how other people live.

“I say all the time, ‘We just don’t realize how much we have it here,'” Sophie said. “To see that physically and to see his little heart for the people there and to participate and help, at first he was a little overwhelmed, but after about the third day he was diving in to help. As a mom, it was good for me.

With the dormitories near Marte’s house, his goal is to turn them into housing for students attending a Christian high school or a Bible institute he wants to build.

Weaver said that in the Dominican Republic, every village has an elementary school, but many children don’t go to high school because it’s considered a privilege, much like college in the United States.

“Pastors there really have no way to train,” he said. “There are no Bible colleges in the Dominican Republic, so he thought he would have a one-year crash course where students could enter, and in 12 months they would graduate for ministry. During those 12 months , they would do everything – they would do weddings, do funerals, give advice, prepare a sermon – that a pastor needs to know.

SCC began hosting sports camps in Navarrete in 2009. Sullivan, a former basketball and volleyball coach at SHS and current assistant women’s basketball coach at Trinity Lutheran High School, has run them each year.

Sports have included basketball, volleyball and soccer, and this year the focus has been on the former two.

Sullivan bought over 60 basketballs and 30 volleyballs and some basketball and volleyball nets to use for camp, and these all sat there for the kids to use. Sullivan also bought whistles and cones for those who helped out at camp, and the 250 kids ages 5 and up who attended received camp t-shirts.

“It’s my contribution to the trip. I’m lucky to be able to do this,” she said.

“One of the churches that Michell has has a youth program, and they do basketball sports ministry, so their youth pastor gets involved and coaches and referees, but there’s no way that he can afford stuff,” Weaver said of the benefits of donations.

Both Weaver and Sullivan said they love seeing kids develop their sports skills.

“Dominican boys in particular are very naturally athletic, but in volleyball and basketball they just don’t have very good skills,” Weaver said. “We see them playing basketball, there are courts all over the country, but you can just say the skills are lacking, but they love it.”

Sharing knowledge about the sport is rewarding, Sullivan said.

“That’s why I keep going back,” she says. “Some looks are priceless. You can’t explain it. You just have to see it.

After spending time learning about the sport and hearing devotions, campers are rewarded with a concert.

“When we show up in some of these rural areas, it’s a big deal for them,” Weaver said. “It’s the only day where it’s probably going to be something special just for them, and so we usually bring in professional musicians, Dominicans they know.”

Since electricity isn’t always reliable there, Weaver said they were using generators to be able to host the concert. This year it included a popular Christian rap artist.

“We would show up with a generator, a rap star and a preacher, and 500 or 1,000 people would show up,” he said. “We use the sports camp as a way to promote the concert, and the concert is where they hear about Jesus.”

On every mission trip that SCC takes, Weaver said there are people who have what he calls “the wow experience,” where something about missions, love for God, and the love for people who have it worse than them has an impact.

“They are just changed forever, and many of them become addicted to mission trips and helping out,” he said, noting that it ripples through their daily lives and makes them want to get involved. in local missions at home. “Somehow it’s just planting a seed for people to love each other. … They can’t wait for the next time to serve. That’s what I see.”

Sullivan said people are coming back with a servant’s heart and looking forward to serving in their communities and making more mission trips.

“It’s a tugboat. That’s why I’ve been back for 13 years and (Weaver) been going for over 20 years,” she said. “You do it because you love God and the people you serve.”

Murphy said he was positively impacted by the mission trip.

“It was really moving and a great experience for everyone involved to grow more in Christ and learn more about helping people and the Lord in general,” he said. “It definitely strengthened my walk with the Lord through our daily devotions at night, listening to my fellow students share their story and how the Lord moves through them.”

Matthew Hanks, a student pastor at CSC, said that although there was a language barrier between their group and the Dominicans, everyone was able to share Christ in their conversations.

“The gospel goes beyond language barriers, goes beyond borders. It’s global,” he said. “It was really cool to experience it in person. After three summers here, it’s the first time I can go and I loved every second of it. It went way too fast, that’s for sure .