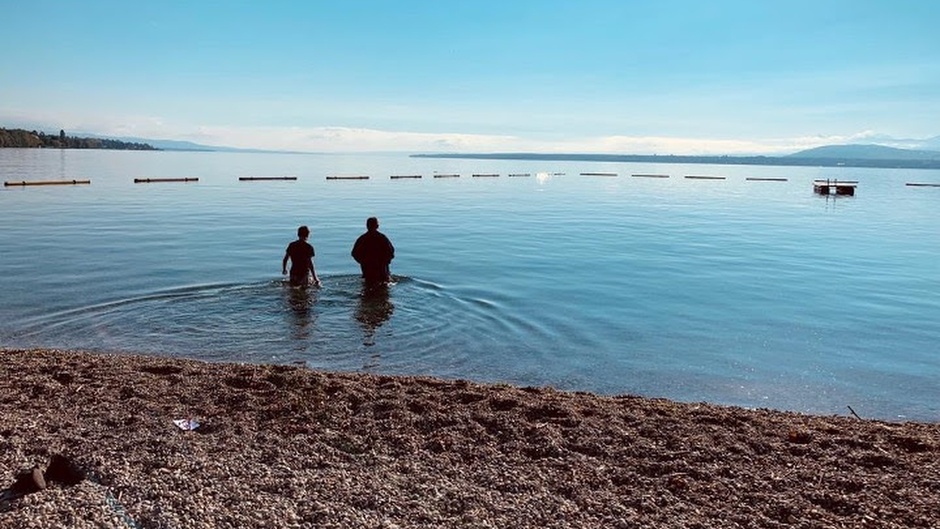 Two free evangelical churches are appealing to the Geneva court after the rejection of their requests for authorization to baptize on public beaches. A decision is expected in a few weeks.

The Swiss Evangelical Alliance (SEA-RES) and its Geneva section, the Geneva Evangelical Network (REG), expressed their solidarity with the two churches. They said they were “shocked that Geneva – the capital of human rights – takes such a restrictive and exclusionary approach to religious freedom”.

Following a well-established tradition in the free evangelical churches, inspired by the public baptisms of the New Testament, the churches organize ceremonies of adult baptism by immersion each year in Lake Geneva.

“In the past, these peaceful ceremonies, which often take place on Sunday mornings when there is little activity, benefited from the explicit or tacit approval of the authorities. This is no longer the case since this summer,” said the Swiss Evangelical Alliance. “Two member churches of the Evangelical Alliance were recently denied permission celebrate their baptisms on public beaches”.

According to State Secularism Act (State Secularism Act, 2008), religious manifestations on the public domain can only be authorized in exceptional cases. However, after the approval of its entry into force, the canton had promised he would take a ‘tolerant approach’ and continue to allow traditional baptisms on the lake. In addition, following a complaint in 2019, the judicial court of the canton of Geneva also considered that authorizing religious demonstrations “only in exceptional cases” was a “disproportionate restriction it is hardly compatible” with federal jurisdiction.

At the end of 2021, the The Swiss Federal Court has removed the term “in exceptional cases” of the law, recalling that freedom of belief guarantees the right to collectively manifest one’s religion in public.

In its negative responses to the two Free Churches, the State invoked the application of the decree implementing the law on secularism (Regulations implementing the LLE). “It was originally intended to determine which communities would continue to benefit from the voluntary contributions of Geneva taxpayers, specifies the Evangelical Alliance. “Now this regulation, with its registration procedure with the State, also becomes a condition of access to other rightssuch as access to public space for religious activities”.

However, “such a practice is contrary to international standards on religious freedom: indeed, the exercise of religious freedom, including freedom to manifest one’s faith collectively and in publicis a fundamental right,” the Alliance says.

The Evangelical Alliances of Geneva (REG) and Switzerland (SEA-RES) express their support and their solidarity with the Geneva free churches concerned by the new interpretation of the LLE. “We regret that Geneva is trampling on its tradition of tolerance and damage its reputation as the capital of human rights,” says Stéphane Klopfenstein, Deputy Director of RES. Regarding the complaint filed by the two churches with the Geneva court, the president of the REG, Thierry Bourgeois, declared: “We rely on justice and are convinced that it will be able to remind the State of Geneva of its obligations”.

The question of religious freedom and access to the public sphere in the canton of Geneva was also the subject of a section of the report submitted today to the United Nations Human Rights Council (HRC). considering the Universal Periodic Review of Switzerland in 2023.

This joint report by SEA-RES and Freikirchen.ch (the federation of free evangelical churches in Switzerland) is also supported by the European and World Evangelical Alliance.

The Swiss Evangelical Alliance (SEA-RES) represents approximately 250,000 evangelical Christians in Switzerland, including 45,000 in the French-speaking part of the country.

Kaduna 2023: The Muslim-Muslim ticket is an affront to the Christian community