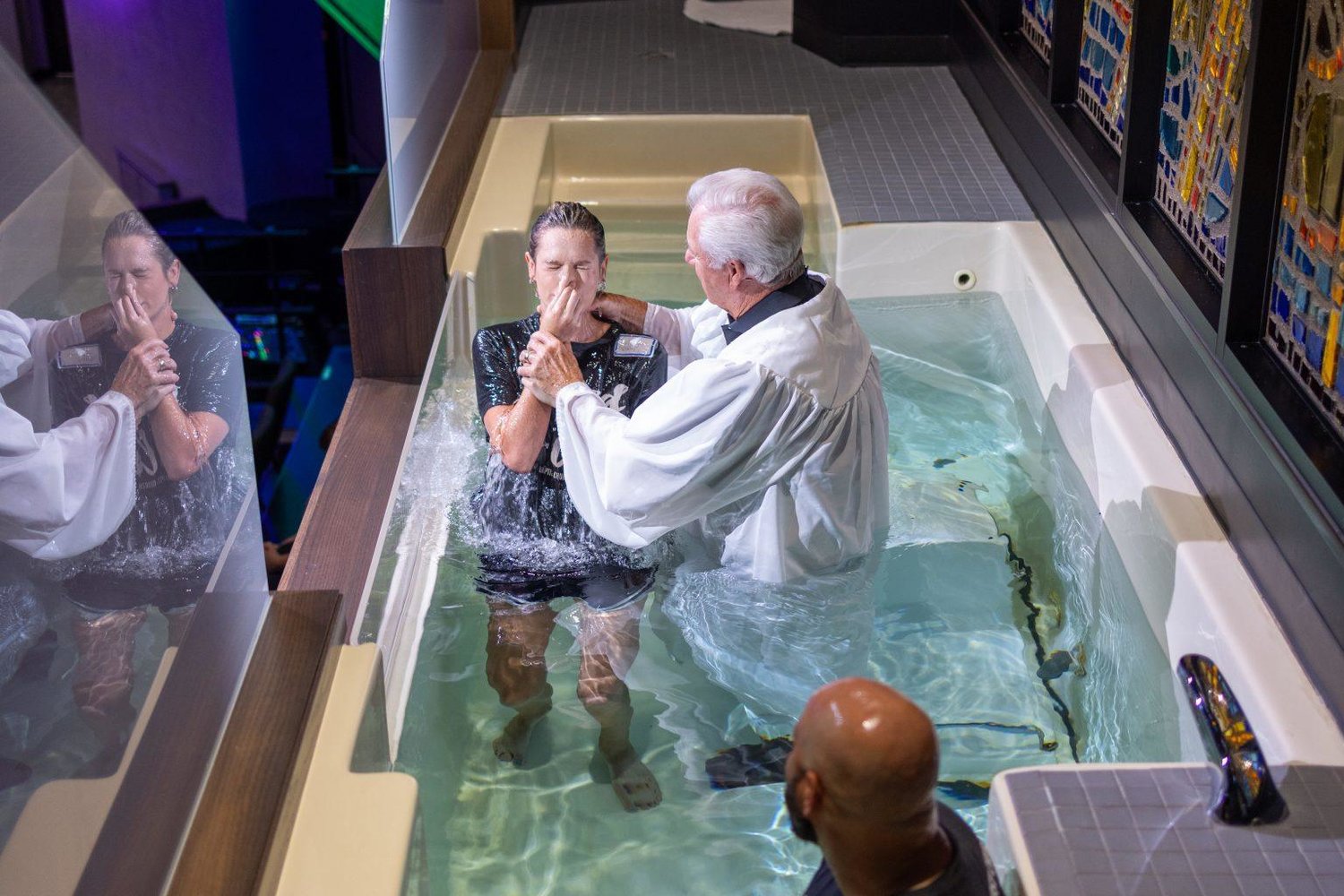 LAKE CHARLES, La. (BP) — Sutton Trombatore had been curious about Jesus for a while, but finally realized his need for a Savior at the end of 2021.

Shortly after witnessing a baptism at Trinity Baptist Church in Lake Charles in December, the 6-year-old had an in-depth conversation about salvation with his parents, Chris and Dani, and members church staff. Sutton accepted Christ at the meeting and on April 24 was baptized by his father.

“I told Sutton that day that he was always my son, but now I have to baptize him and call him my brother,” Chris Trombatore told The Baptist Message. “There is no greater reward for a father than to have his son baptized.”

Trombatore is among 125 new converts the church (which averages 1,400 for worship) has baptized, collectively, every Sunday since October 31. 53 others have professed Jesus as Lord and are awaiting baptism.

Pastor Steve James said his goal each year is for at least 100 people to decide to follow Christ and be baptized. Since January 2, Trinity Baptist has baptized 99 and is on track to have its highest number of baptisms (197) since 2012.

James attributes the flurry of baptisms to the congregation inviting others to attend worship, which often leads to a decision during the service, a meeting with a pastor after worship, or a home visit later.

“People ask me all the time, ‘What is the reason for all these salvation decisions and baptisms?’ and I tell them there is no special plan or magic formula,” James said. “People come to see us, we see them, we talk to them about Jesus, they are saved. We give glory to God for all this.

Student pastor and evangelist David Doyle said he is thrilled that so many lives are changed every week when they meet Jesus.

“Our church is excited about the vision and what God is doing,” Doyle said. “It normally takes years to recover from things like the pandemic, hurricanes and floods. But we have seen growth in the first year of our return. All glory to God. With Jesus, the best days are always ahead of us. We continue to move forward as a church and look to Jesus.

Trinity Baptist, which sustained heavy damage during Hurricanes Laura and Delta, has been a beacon to the community during multiple natural disasters in 2020 and 2021, serving as a hub for ministry to hurricane survivors, relief workers and law enforcement.

Disaster relief volunteers with state Baptist conventions across the country have joined organization workers and up to 50 Trinity Baptist members each day to use the church as a launching pad for ministry. as part of disaster relief efforts. Additionally, local law enforcement teams have used the campus as a staging area, creating even greater visibility for church ministries within the community.

The church in March raised more than $90,000 which was forwarded to Louisiana Baptist Disaster Relief, which, in cooperation with SEND Relief, used the funds to purchase emergency food, shelter, transportation, medical care and hygiene kits for displaced Ukrainians. Part also offset the costs of a team that traveled to Poland in early May to deal with Ukrainian refugees.

James said the church has long been known as a beacon of Christ for the community, but disasters since 2020 have given members an even greater chance to show their neighbors the love of Christ.

“People have been a little more open since then,” James said. “They see Trinity as a genuine love and compassion for people. They remember the role we played in hurricane relief and being the base church where they could come for meals and supplies. We realize that we have received a lot of help from the state and outside of Louisiana, but people look to Trinity as the place to help them in times of difficulty.

Brian Blackwell writes for the Baptist Message, the news journal of the Louisiana Baptist Convention.

Secret baptisms show how Christians are still persecuted around the world