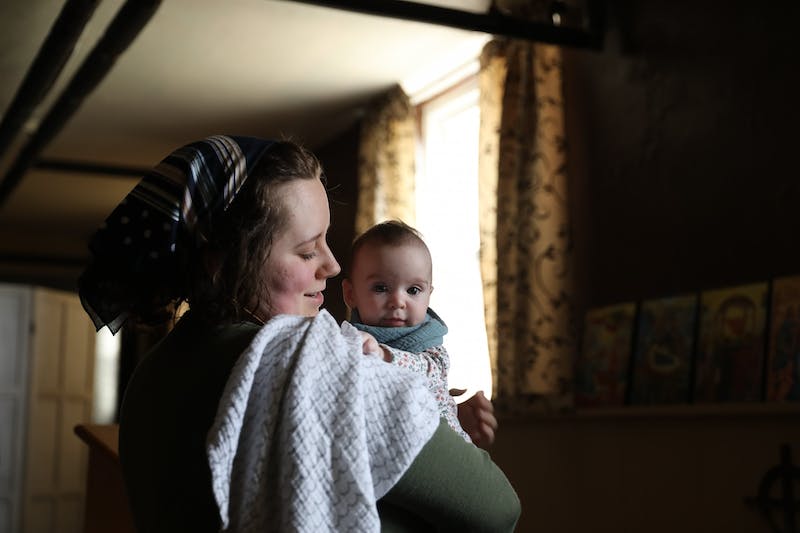 On April 4, Father Joel Weir began a long drive from Crawfordsville, Indiana, to Muncie. He was preparing to lead the first full liturgy of presanctified gifts at the Orthodox Church of Saint Photini.

He arrived in Muncie early before the service, not at an Orthodox church, but at a local Evangelical church – Urban Light Community Church. From there he went down to the basement of the church, to a small conference room which he and a small group of Orthodox Christians had managed to convert into a full Orthodox service.

The conference hall was full of iconography, candles and an altar, as well as many other traditional elements of an Eastern Orthodox liturgy. This small conference hall is St. Photini, a small Orthodox evangelism and the only known Orthodox Christian evangelism in Muncie that currently hosts evening prayer vespers, according to ancient Orthodox tradition.

“There really is no Orthodox presence within half an hour of the greater Muncie area,” Weir said.

One of the first members of St. Photini, Michel Calache, said: “There is a void of Orthodoxy in East Central Indiana, and I would like people to know more about this faith and this denomination.”

Orthodox Christianity is one of the oldest Christian religions, alongside Catholicism, and many ancient traditions have grown to be included in modern services.

Orthodox services are rooted in Eastern rather than Western practices, so they differ from most other American religious denominations. Services still include the oldest and most ancient practices, such as burning incense throughout the service, the use of iconography, the chanting of prayers and psalms, and many other oriental elements. who have “a sense of the sacred and an embrace of mystery”. Weird said.

Some of the closest Orthodox churches to Muncie are St. George Orthodox Christian Church in Fishers, Indiana, and Holy Apostles Greek Orthodox Church in Indianapolis.

St. Photini began its outreach in 2018. However, its beginnings are not in Muncie, but in Gas City, Indiana.

“Our first meeting place was in an old building called Jacob’s Well,” Weir said. “Coincidentally, Jacob’s Well is where Jesus met St. Photini, so we thought that was a good connection, right?”

The inspiration behind Saint Photini’s name is rooted in scripture.

“In the gospel, St. Photini is the Samaritan woman at the well who meets Jesus,” Weir said. “They had an interaction, and in the end, she really recognizes who he is, and she’s going to tell other people about him.”

Weir said his congregation chose the name St. Photini because they liked “the idea of ​​going to where people already are and establishing a presence there.”

About a year after its founding, the parishes of St. Photini were disrupted and ultimately shut down due to the COVID-19 pandemic. After a year of inactivity, Weir and the members of St. Photini needed a new place of worship. The search eventually led Weir to contact Pastor Andrew Draper at Urban Light Community Church.

“He was very open to leaving space [at Urban Light] be used by different religious communities,” Weir said. “Pastor Andrew has been very supportive of us and is just very friendly to Orthodoxy.”

In September 2021, Weir and St. Photini Congregation personally chose a small conference room in the basement of Urban Light Community Church to hold their services.

“We have assembled a core group of people who are ready to meet, pray and take communion twice a month,” Weir said. “For now, we hope there will be local interest in seeing it grow.”

Weir said the Orthodox Church “has a lot of entry points for people, whether they’re looking for a place of peaceful meditation, wanting to experience something different in Christian worship, or just curious. and want to know more about this church which has such a rich history.” Weir hopes St. Photini will not only be a resource for spiritual prayer, but will also offer a helping hand to the Muncie community.

“We seek first to be faithful to be an ongoing worship presence within the community,” said David Dunham, St. Photini member and Taylor University professor. “A big part of it, at this point, is just letting the community know we’re here.”

Weir has expressed interest in working in conjunction with Urban Light Community Church to better “plug in” to Muncie and make a positive impact in the community.

“Pastor Andrew has been so welcoming, so accommodating and so supportive,” Weir said, “but also, I love the work Urban Light is doing for Muncie. is Urban Light.