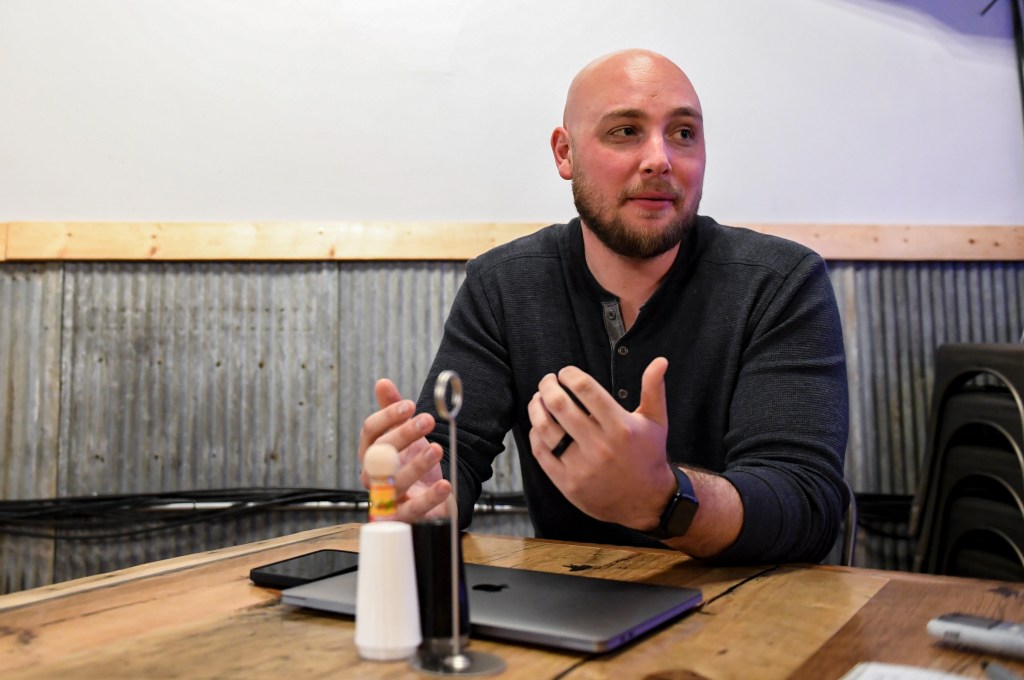 Jeff Poor was drawn to the Johnstown and Milliken area not for its growing infrastructure, shopping areas, schools and residential options, but for what it lacked.

When the idea was placed in his heart to start a church, Poor chose the area for its lack of local churches.

The process of planting or starting a church from scratch is much like opening a business. You have to find a place, spread the word, find help, and eventually attract people to build the congregation.

The church is part of the Nexus Church Planting and Leader Care program, which helps pastors through the process of starting a new church in a community.

“Nexus is a church planting organization in Texas, and they plant churches all over the country,” Poor said. “That’s where we come from, but we’re an independent church. A council will govern us for the next three years, then as we move forward we will begin to train leaders within the church to become a fully independent, locally governed church.

Johnstown’s population is approaching about 20,000, with Milliken totaling about 5,000 community members, Poor said.

“So talking to the city council, they expect Johnstown, not including Milliken, to reach 40,000 to 50,000 by 2030,” he said. “Growth is exploding exponentially, and what we have found in this area is not a lack of quality churches, but a lack of quantity churches. Only about 5-6% of Johnstown residents attend church in Johnstown.

“There just aren’t enough churches to meet the needs.”

Poor works with other churches in Johnstown to meet this community need as well as to provide people who move to the area with a place to worship and “find their story”.

Although the city was successful in building residential opportunities, finding a commercial building to house the church was a bit of a challenge.

“To build infrastructure you need revenue, so they built houses to get tax revenue, so now they are starting to build a lot of other infrastructure. So there aren’t a lot of options,” Poor said. “We contacted three places – a school, the YMCA and another church – and we see which of these would work best for us.”

The poor hope they will have a building or location to house the services by mid-April.

Poor’s vision of StoryLine is to be more of an “outward-looking church.”

The church will be LGBTQ+ friendly and welcome community members of all ages, races and financial backgrounds.

“We want to sit with people who are different from us. God loves them, so we should love them,” Poor said. “And it gets messy sometimes because I’m messy, you’re messy, we’re all messy. But it makes for interesting conversations, and that’s what I’m here for. We all need to come together and go through life together.

“The negative side, a lot of this is very true and very much deserved on the church as a whole. Even the majority of churches are not the problem, but there is a segment of churches that paint a negative picture of the church. Poor said. “But this person doesn’t represent the church as a whole or Christianity or Jesus. I’m trying to model what a better attitude would be. I’m not perfect, I have my mistakes, but I’m going to be transparent with that and try to do what’s best for the community and for the church.

Churches and religions of all kinds are struggling at all levels when it comes to getting younger generations through the doors. Many have started offering a more relaxed service where members can “come as they are” in jeans, T-shirts and even shorts. Others revamped their music to include a full band and more contemporary, upbeat tunes while others set up cafes and started offering a wider range of programming online.

StoryLine’s desire to get young people through the door is no different.

“A lot of churches are doing a lot of things. We’re not trying to do a lot, we’re trying to do a few things and do them well,” Poor said. “I think a lot of it depends on how you present it. So when we do a Bible study, we keep it very simple. We’re going to get together over a meal or a drink and talk about what I call ‘happiness and shit’, read a few words from the Bible and ask a few questions. We try to keep things simple and focus on what’s most important.

Colorado is familiar territory for Poor and his wife, Gale, who have a young son named Jett.

“I moved to Colorado in 1999 and lived briefly in Broomfield, but mostly in Longmont,” Poor said. “I got married and we lived here for about three years before my wife and I moved to Virginia Beach in 2016.

“We’re both from Colorado, but we wanted to get away for a while, which was great for us. But we really missed the culture and we wanted to be back with the family.

Poor became interested in pursuing the path of becoming a pastor when he was around 16 and interning at a church.

“At the time, I wanted to go to the Air Force Academy and be a fighter pilot,” Poor said with a laugh. “Then I learned that you had to be good at math and science, which I wasn’t. My eyes are not well and I’m too tall. All the cards were against me, so it probably wasn’t going to work.

After rejecting the Air Force Academy, Poor considered becoming a police officer, but felt he might get bored with the job.

“Nothing really caught my eye,” he said. “Then I was working at this church and seeing what these other pastors were doing, and I thought it was something I could do every day of my life without getting bored.”

Poor has been in the “church world in a way” for about 11 years.

“If I got fired I don’t know what I would do because it’s really the only thing I’m passionate about and I can wake up every morning even when it’s hard, know that’s what what I want to do.” he said.

Poor’s love of challenges and planning led him to explore church planting. StoryLine will be his first church plant of his pastoring career.

“For good, bad or otherwise, the problems we are going to have will be my problems that I created or allowed,” the pastor said. “And I like that, rather than taking on somebody else’s problem and trying to solve it. I like that entrepreneurial style of doing things.

The church plans to begin in-person services the week of August 14 and offer a day and time other than 10 a.m. on Sunday.

To learn more about StoryLine Christian Church, its mission, or to join the team, visit www.storylinecc.com.