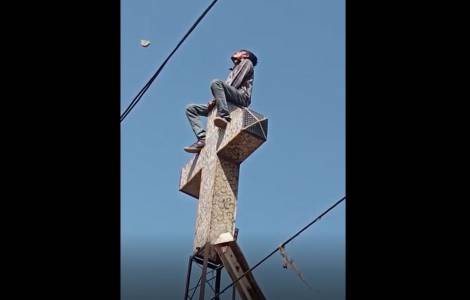 Lahore (Agenzia Fides) – The police in Lahore have accused the young Muslim Muhammad Bilal of blasphemy. He is said to have desecrated the cross of the Pentecostal congregation “One in Christ Church” in Lahore by his actions. According to the first information report, the young man was arrested under Section 295/a of the Pakistani Penal Code for desecrating a place of worship with intent to offend religious sensitivities. On the morning of March 16, around 10 a.m., Muhammad Bilal scaled the approximately 12-meter-high cross that stands next to the church and attempted to damage it. When that failed, he sat on it and shouted “Allah u Akbar” (God is great).
Akash Waqas, Christian founder of the One in Christ Church, tells Fides: “We heard the man’s voice screaming and we saw him desecrate the cross and try to damage it. When the crowd gathered in the street, the young Muslim man jumped to the ground and injured himself. We detained him and handed him over to the police. The police took him into custody and released him after a few hours. We, the faithful, together with the bishop, demanded a proper investigation into the incident, to find out what the intentions of the attacker were and why he wanted to damage the Christian place of worship. The police arrested him again and charged him”. Ilyas Samuel, spokesperson for the Pakistani human rights organization Voice for Justice, told Fides: “I hope justice will be done in this case. We call on the Pakistani government to protect religious minorities and their places of worship from those who incite religious hatred. We Christians are peaceful people and we did nothing to the young man who desecrated the Church and the Cross. We respect the law and the principles of the rule of law”. (AG-PA) (Agenzia Fides, 03/21/2022)