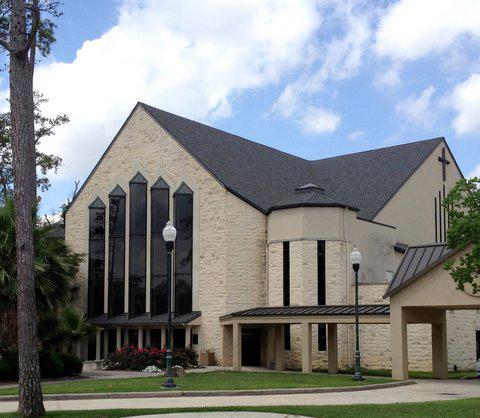 Senior Pastor Bruce Frogge first came to Cypress Creek Christian Church nearly 10 years ago. He had served in other churches before, but the first thing he noticed about Cypress Creek was how they treated their buildings.

“I’d served in churches before that were so protective of their buildings and ready to kick scouts out if they scratched something, but not at Cypress Creek,” Frogge said. “They expect buildings to wear out because they are used.”

The church first started as a small group meeting at the home of Betty and Bill Ayers, Frogge said.

“Starting a new church is not for the faint of heart or the fed up,” he said. ” It’s a lot of work. They had the usual difficulties, finding space as they grew, moving between schools – they were in Bammel (middle school) for a while.

After a few years they received the land to construct their first building, called the Forum Building, and over the years slowly began to add other buildings, including the Centrum, a theater used by Cypress Creek FACE to stage shows. as part of the Cypress. Creek Cultural District.

“At one point, we had as many as 150 nonprofits using the facilities each year,” Wilkerson said. “Because the buildings have been opened up to the whole community, there has been a huge contribution in terms of helping to build the facilities. About a third of the cost of all construction was funded by organizations and individuals outside the church.

Frogge said the church is a comfortable place for the community, as it is often used to host events such as Klein ISD Art Days and Houston Opera House operas.

On HoustonChronicle.com: Klein’s $1.1 billion bond could include a new $131 million football stadium and events center

“It’s just helpful to be able to not only put us on the map but also create a sense of welcome and hospitality when it comes to a community event and it’s a little easier for people when considering looking for a church,” Frogge mentioned.

In addition to the Forum building, the church also has an annex building, a teaching building for Sunday morning classes, the Centrum and a small chapel where occasional weddings take place.

Wilkerson also helped found Northwest Assistance Ministries with Rosemary Hornsby, a nonprofit organization made up of about 10 different churches that have come together to provide assistance to residents in need.

“The story begins with a group of volunteers keeping money in a cigar box and helping people in need,” Frogge said. “Of course, it’s now a multi-million dollar community service ministry. We have volunteers working in the Resale Shop, so we stay connected to NAM. We feel deeply connected because of it.

In addition to NAM, Wilkerson said Cypress Creek started the Northwest Chapter of Habitat for Humanity, which helps build homes for those in need.

“Two men named Richard Hall and Joe Cantrell came in and said they wanted to start a Habitat for Humanity chapter,” Wilkerson said. “Their first desk was a filing cabinet in one of our church classrooms.”

The church has also provided support for issues considered controversial, including a support ministry for HIV and AIDS patients in the early 1990s.

“It was quite controversial at the time and yet this church moved forward, and it was incredibly helpful that we talked about those who had tested positive for HIV or family members or other important people,” Frogge said.

As part of the support ministry, the church would take Montgomery County residents on a bus to a clinic in Galveston where they could receive HIV treatment.

“I think it really speaks to this congregation in the face of what might be a community backlash,” Frogge said. “Today I hope there won’t be that, but then there was, and that church said that’s what we were called to do and that we were going to do it. make.”

The church was hit hard by Hurricane Harvey in 2017, Frogge said. Although FEMA and flood insurance helped cover some of the damage, it didn’t pay for it all.

“It was our first flood recovery – we were learning on the fly and yet we found a way,” Frogge said. “We just kept finding a way and appreciated the people who stuck to it. For a long time this place wasn’t pretty. There was still a sort of flood water stench. People kept saying it wasn’t about the buildings, it was about the people.

The Centrum was the last building to be brought back online about six months ago following damage from Harvey, Frogge said. Although there are still some corrections to be made, the church is largely restored.

“It’s about helping people strive for that goal, how to become a person who can put love first more often,” Frogge said. “This congregation has always been very welcoming and has affirmed great diversity, and yet it can get difficult.”

The church welcomes people of all races, genders and sexual orientations, Frogge said, saying all people were created in the image of God.

“We’re still learning and stretching because we’re forced to confront something that maybe we hadn’t thought of before,” he said.

Cypress Creek Christian Church is scheduled to hold a 50th anniversary celebration on Sunday, March 13, with a barbecue lunch after a service that begins at 10:25 a.m.

The church is also selling raffle tickets until June 4 to raise funds for the development of the new church for the Christian Church (Disciples of Christ) with prizes such as gift cards, a quilt and a cross of table.

The draw will take place on June 4 during a “Dessert Before Lunch” event. The event will also include an after-service 70s-inspired fashion contest.

On Religion: Are Southern Baptists Facing Another 1979 Civil War? |