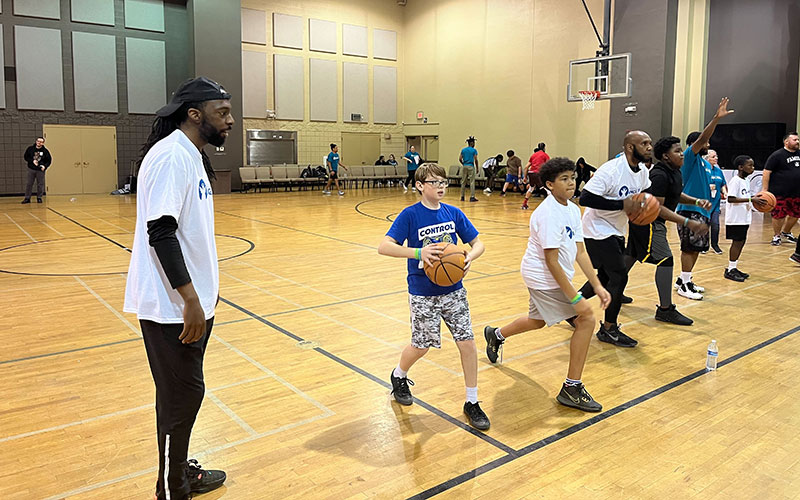 MESA – In 2011, David Prian was arrested for trafficking in stolen vehicles and sentenced to prison, where he will spend 16 years of his life. Shortly after his conviction, his first son, Erik, was born.

Prian remembers feeling like he had no purpose and was being left behind. But the biggest challenge of incarceration was being separated from his wife and new son, especially during the holidays.

“When you’re locked down, holidays are always the hardest,” Prian said.

“At Christmas, thanks to this incredible organization, my son was able to receive presents from his father,” he said. “It allowed me to be part of Christmas with my family, which meant a lot to us.”

Now Prian is giving back to the organization that helped him and was recently on hand to help the Central Christian Church of Arizona run its Prison Fellowship Angel Tree sports camp at the church’s Mesa campus. .

He was grateful to be in a position where he could help guide children and parents through situations that are all too familiar to him due to his past.

Prian said his life changed after that Christmas visit.

“I felt like I was always valued – like I mattered,” he said. “It showed me that there were people who not only cared about me, but also my family.”

It is not an uncommon experience.

According to a study conducted by Central Connecticut State University, a child whose parent is incarcerated is about three times more likely to get into trouble with the law than other children. In the United States, 8% of children have had a parent incarcerated. In Arizona, that number is even higher at around 11%.

“We want to break this cycle of incarceration,” said Karen Lopez, director of Church Partnerships & Angel Tree Sports Camps, which organized the Mesa camp. “We are trying to get that point home. Just because a parent, loved one, or someone you know made questionable choices doesn’t mean you should too.

The camp was exclusively for children of incarcerated parents and offered a day filled with activities coupled with orientation.

The camp benefited more than 150 Arizona children ages 7-17. Each camper received a basketball, a Bible and a pair of sneakers – with a wide variety of sizes and styles to choose from.

Although the organizers were delighted to see the children having fun, the day was more than a game of basketball and hanging out with friends.

“It’s not just a day of fun,” Lopez said. “It’s about having long-term impacts on these children and their families. One of our main goals is to show (to children) that their own choices can shape the direction of their lives.

He brought the campers together and gave an inspirational talk about decision making and life choices before ending with a prayer and sending the campers off to various basketball drills.

“I think it’s a big surprise to many – how many children whose parents are incarcerated there are right here in our community,” Emerick said. “This camp was a great way to be present in their lives, helping them and blessing them in any way possible.”

The event included an appearance from Kenny Dobbs, billed as “The World’s Best Slam Dunk Artist”, and someone who narrowly avoided his own prison sentence as a young man.

Dobbs taught the campers some basketball basics before putting on a dipping exhibit.

However, while Dobbs may specialize in dunking basketballs, he acknowledges that’s not the true meaning of camp.

“The goal of today’s mission is to use basketball as a vehicle to be able to impact the lives of these kids,” Dobbs said. “As they say, it takes a village to raise children. We’re here today as a village, a community, impacting these kids, man. That’s the whole story.”

A study conducted by Central Connecticut State University found that nearly 11% of children in Arizona have had an incarcerated parent. (Photo by Dylan Rush/Cronkite News)

About 70% of children in America are lucky enough to be raised in families with two parents, so many of them don’t need a village. But children of incarcerated parents often do.

The Prison Fellowship was founded in 1976 by a well-known figure in the history of American politics, Charles Colson, who was special adviser to former President Richard Nixon. Colson was sentenced to federal prison for obstruction of justice during the Watergate scandal.

After his release, Colson decided to dedicate his life to creating a more restorative approach to the criminal justice system.

The Colson Fellowship seeks to transform the lives of prisoners, care for their families, and champion a justice system that helps individuals change their ways. The program is funded almost exclusively by charitable donations, with contributions exceeding $60 million in the past calendar year.

In addition to organizing camps for children, members of the organization visit prisons across the country to assess who they could help and how. As they urge prisoners to enroll their children in Angel Tree sports camps, the Fellowship also provides prisoners’ families with Christmas gifts like the ones that made such an impression on Prian.

Rather than placing the organization’s address on the gifts, the community addresses the incarcerated parent’s gifts, reminding children that their mother or father is still a part of their lives. It’s a subtle but important detail.

“We try to touch the lives of these children throughout the year, but it all starts at Christmas. It’s one of my favorite things we do here,” Lopez said.

And, yes, he bought them all.