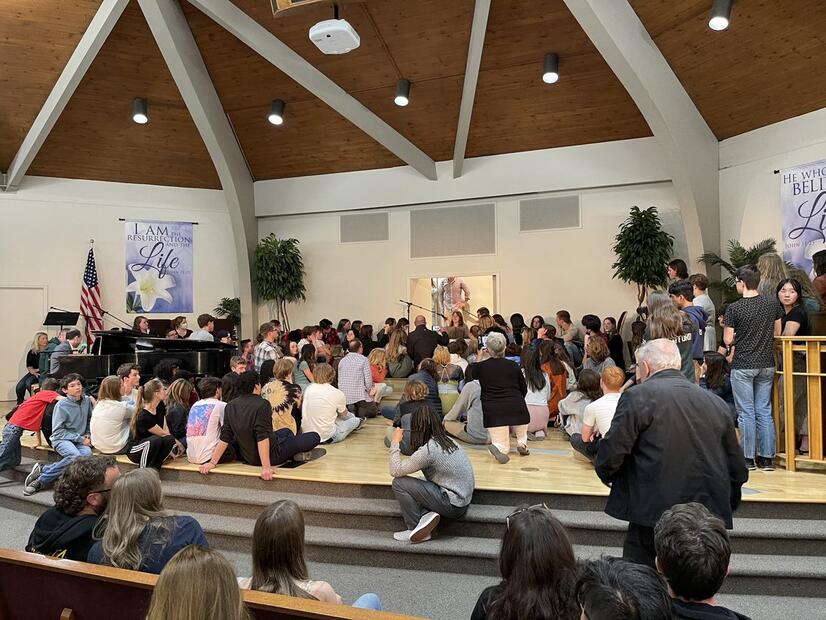 Upper Columbia Academy celebrated the baptisms of 38 people in June 2021.

Initially, the service included a few baptisms for students whose families would be present during the graduation weekend. After witnessing their dedication, other UCA students, staff, parents, and alumni lined up to be baptized at that time.

More than two hours into what has become a nearly three-and-a-half-hour baptismal service, Sid Hardy, chaplain and UCA Bible teacher, commented on how the blessings kept coming. “Today I lost count,” Hardy said. “Every time I go back I think, ‘Okay, we have three more left’, and then I go back and there are more than three left. It just keeps multiplying.

Families approached the baptism for a close view as loved ones publicly proclaimed their love for Christ. Eventually, the scene surrounding the baptism was flooded with those who wanted to show their support.

Clair Barrutia, volunteer dean of women, was among the many baptized. Barrutia was previously a student at UCA and returned to serve as Dean after graduating from Walla Walla University.

“God works in really mysterious ways,” Barrutia said from the baptismal font. “I told him to give me a shout tonight because I had been thinking about it for a while. I was like, ‘Oh, I’ll do it next year or something.’ Then Franny came up here and she said, “Why wait?”

Barrutia echoed the sentiment, “Yeah, why wait when you have today?”

In addition to the 38 baptized that night, many other lives were touched, including two young children in the audience, who then shared with their families that they wanted to attend UCA for high school and be baptized as well.

For more information about Upper Columbia Academy and how to apply, go to ucaa.org/apply.

You are invited to paradise | Religion