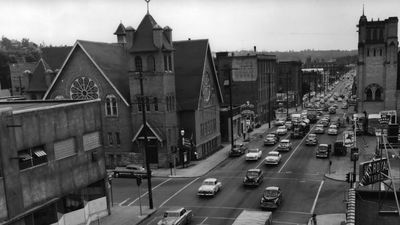 Then and Now Gallery: Then and Now: Central Christian Church – January 30, 2022

In early Spokane, the main downtown Christian churches often had the word “central” in their names to distinguish them from the growing number of churches in outlying areas. The Central Christian Church stood at Third Avenue and Stevens Street across from the Central United Methodist Church at Third and Howard. The Central Lutheran Church is a few blocks away at 5th and Bernard.

The Central Christian Church was founded in 1886 and held its first services in a Congregational church, at the YMCA and at the Women’s Temperance Union hall.

The Interstate Highway system, planned in the 1950s, would bring a freeway through downtown Spokane on Fourth Avenue. Many buildings were moved or demolished to clear the way. The highway washed out the large Central Christian parking lot behind the church.

In 1969 the church sold the building to the Union Oil Company for a gas station. The church separated its historic Moller-Tubal pipe organ and began building a modern church at the corner of 57th Avenue and the Palouse Freeway.

As the church celebrated its centennial in 1986, church members voted to change the name to Covenant Christian Church, reflecting their suburban location. In 2006, the church sold its building on the Palouse Highway to developer Harlan Douglass, who hoped to sell it to the Walmart Corporation for a new store. This project never materialized.

The congregation moved to a new building at 5115 S. Freya Street. In 2014, the church was renamed Origin Church.

And in 2019, the group donated the building, and three acres surrounding it, to the Spokane FāVS organization, which publishes an online publication of local religious news.

It will be used as an interfaith center for worship, classes, retreats and celebrations.

1952: Rush-hour traffic, moving east toward Washington Street, fills Third Avenue. The street averaged 1,500 automobiles, trucks and trailers per hour at peak traffic the year after becoming a couplet with Second Avenue. The third was a major part of the east-west route through downtown Spokane. Interstate 90 did not relieve congestion until it was completed two decades later.

Today: Looking west on Third Avenue in Spokane, few buildings remain from the 1952 photo except for the New Community Church, which meets at the old Central Methodist Church on the far right. A Jack In the Box restaurant stands on the site of the former Central Christian Church. Later, a Union 76 gas station stood at the corner of Third Avenue and Stevens Street from 1971 until about 1990. The church moved out of downtown because its parking lot, which faced Fourth Avenue, was moved by the new Interstate 90 freeway.

Spitting, screens and sneakers: the rise of the preacher-influencer | Religion