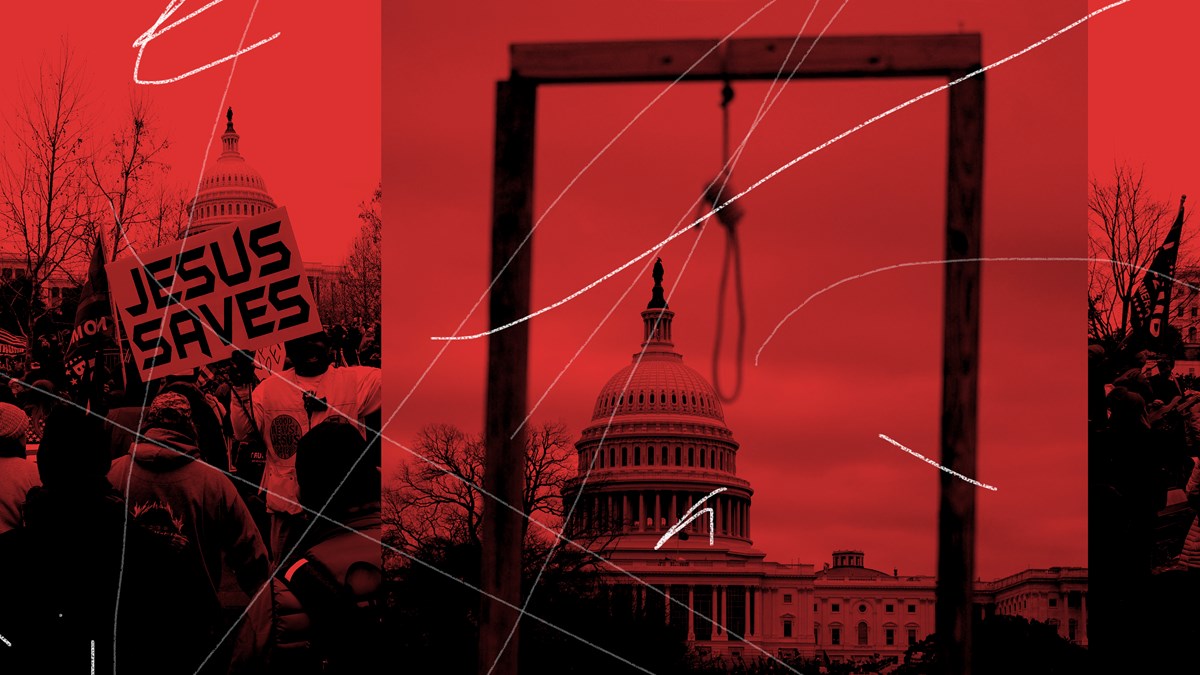 A year has passed since the January 6 insurgent attack on the United States Capitol, and two images still haunt me. One is that of a makeshift gallows built to threaten the murder of the Vice President of the United States. And the other is that of a sign, held above this angry crowd, which said: “Jesus saves”. That these two images can coexist in the same crowd is a sign of crisis for American evangelicalism.

Some might reject Christian symbols in the uprising – not just signs but prayers “in the name of Jesus” right next to a shaman wearing a horn in the well of the evacuated US Senate. And some might dismiss evangelicals who falsely claimed in the days that followed, it was a crowd of antifa activists, not people from the rally at which the then president of the United States urged the crowd to march to the Capitol.

And yet, investigation after investigation shows that an alarming number of white evangelicals believe the lie behind the attack – that the 2020 election was stolen by a broad left-wing conspiracy that somehow included conservative Republican governors and officials voters in Georgia and Arizona.

An evangelical mega-church hosted former President Trump in recent days – with the crowd chanting “USA!” in response to the political speech of the former president. This scene might be a bit too much on the nose for most evangelicals, but polling data shows it’s no outlier. And the same polls show that, far from “calming down” after the Trump era and the insurgency, these people think violence may be justified in the days ahead.

In some ways, what we have seen in the year since the insurgency represents a change. Note the growing number of people who identify as “evangelical” — many of whom don’t even go to church — because they assume that’s the religious designation of their political movement.

But, perhaps even more worryingly, these trends represent what hasn’t changed at all.

In the days leading up to the uprising, some evangelical Christians gathered on the National Mall for a “Jericho Marchrepeating the same lies – that the election had been stolen and therefore had to be annulled. This type of assertion which, like Trump Put the“If you don’t fight…you won’t have a country,” is not new to large sections of American evangelicalism.

Some have sold literal or metaphorical bunker supplies for the impending collapse of civilization for sure because of Y2K or Shariah or Supreme Court ruling. Oberefell a critical race ruling or theory or a plot to permanently close churches due to the pandemic, or otherwise. Many sectors of evangelicalism have become apocalyptic about anything but Revelation proper.

As with insurrection (and virtually every authoritarian movement in history), an apocalyptic moment is an emergency requiring urgent action. Thus, we get the cognitive dissonance of people who support law and order (sometimes quoting Romans 13) beating police officers and smashing windows in order to shut down Congress’ constitutional duty to count electoral votes. These are the people who can ridicule the very words of Jesus Christ about turning the other cheek as naive and weak.

This kind of emergency, we are told, cannot care about constitutional standards or Christian character. The reasoning is that the Sermon on the Mount is not a suicide pact and that the way of Jesus only works with more reasonable enemies than these, like, I suppose, the Roman empire which crucified the one who gave us such a lesson.

It would be one thing if it was just the mob attacking the Capitol that day. It’s another when people – including people with highlighted passages in their Bibles and prayer requests on their refrigerators – dismiss the attack as a mere protest that we should “move on” from it. . This poses more than a threat to American democracy – though that would be bad enough – but a threat to the witness of the Church.

You can’t bring the Good News to people you could, if things get bad enough, beat or kill. You cannot do good by doing evil. One cannot “defend the truth” by using lies.

Perhaps January 6 was a terrible anomaly in our history, an anomaly that will never happen again. I hope so. Or maybe January 6th is, like Atlantic Put the, “practice” for even more coup attempts and mob violence to come. I do not know. Either way, I know this: As American evangelicals, we cannot justify what happened on Capitol Hill a year ago. Nor can we ignore it. If Jesus is the one who saves, then we must go in his direction – and it is towards mission, not resentment, towards the gospel and not rage.

[ This article is also available in
Português,
Français,
简体中文, and
繁體中文. ]

Punjab: the Christian community is delighted that its leader has reached ministerial rank | Amritsar News