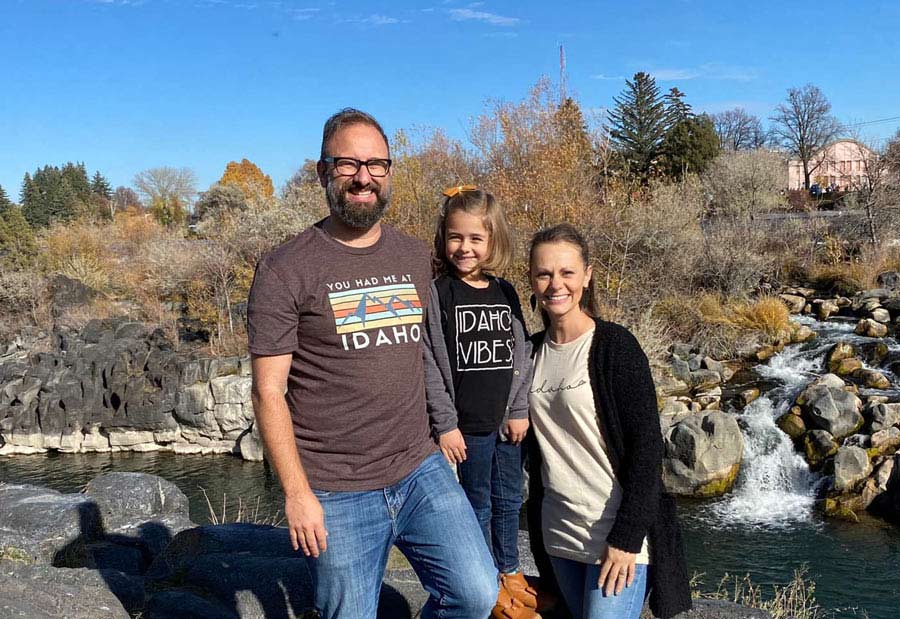 Aaron Duvall, 39, moved to Idaho Falls last month with his wife, Chera, and six-year-old daughter, Harper, to become the church’s new pastor. After a warm welcome from community members, Aaron tells EastIdahoNews.com that they are happy to call East Idaho their new home.

â€œIt was really good. The people have been incredibly nice, â€says Aaron. â€œPeople brought us dinner every night for the first two weeks we were here. It was great, very welcoming, very hospitable.

Aaron takes on the role previously held by Bob Sherwood, who stepped down more than six months ago after about 15 years to spend more time with his family.

A 15-year ministry has been the trend for the last two pastors at Crosspoint Community Church and when asked if he plans to continue the tradition, Aaron responds enthusiastically, “I hope so.”

“I’m done moving, I can tell you that,” Aaron laughs.

The Duvalls are from Painted Post, New York, a small rural community near the Pennsylvania border that Aaron says has a similar vibe to eastern Idaho. The move to Idaho Falls is the couple’s third move in 16 years and the longest and most expensive to date.

While this is not Aaron’s first pastoral work, he says he looks forward to “finding his rhythm” in this new ministry and “discovering how it can serve the community and the church.”

â€œAnyone can just be someone speaking on stage, but to minister and be involved in people’s lives it takes years to be there and to introduce yourself. “

A life of ministry

The choice to pursue a life of ministry is something that was deeply ingrained in Aaron’s education. His father was a pastor in southern Ohio when he was a child, and he often visited people with him.

â€œWhen I was five or six, he bought me a little costumeâ€¦ to go to the hospital with him,â€ recalls Aaron. â€œHe called me his associate pastor. Looking back it might have been a bit of a setup, but I loved it. I’ve seen people’s lives transformâ€¦ and as I got older I thought that was something I could be a part of.

During his college years, he worked at his father’s church during the summer. When he officially became a pastor at the age of 23, he spent the first three years as an associate pastor under his father’s tutelage in southern Ohio.

He spent the next 10 years at Ohio Christian University before becoming a pastor of a congregation in New York.

â€œOver the last year or so, we just started to sense that there might be a tugboat (to come to Idaho). My wife was suffering from cancer and there was COVID. It was like one crisis after another, â€says Aaron.

Chera, originally from Nampa, has family ties to Gem State and the couple have spent a lot of time in Idaho because of it.

Aaron remembers a conversation with a lady in Nampa last spring while playing golf with her stepdad that sparked the initial spark to move to the area.

â€œWe got into a relationship with her (one way or another). Honestly, if I saw her, I (wouldn’t even remember her). She heard me say something about the ministry and she said, ‘Are you a pastor?’ Aaron says.

The woman, who attended the Church of the Nazarene in Nampa, ended up passing Aaron’s name on to the district superintendent for the church’s Intermountain District, and he and Aaron then crossed paths.

Aaron was invited to speak at CrossPoint in October before being offered the post of pastor.

â€œIt was a bit crazy. It wasn’t something that neither of us had orchestrated. God kind of moved there and now we’re there, â€he says.

From the early days of observing his father’s ministry to ministering himself, Aaron says he is constantly reminded that “none of this concerns me” and that he feels his role is not so much about leadership as it is about being “the first disciple.”

â€œJesus is the leader and he is the leader and I’m just trying to do what he tells me to do,â€ he says. â€œAs a pastor, you are first and foremost a servant. You are the first who should go out to take care of people.

In the wake of a turbulent season in US history where COVID-19 has impacted the way people pray and many churches have seen their numbers decline, Aaron says most people seek out hope and a purpose.

As he takes the reins of CrossPoint Community Church, he is excited to see where â€œGod is leadingâ€ and how he brings him and his congregation together.

â€œI think the church can deliver (hope and purpose) in a real and tangible way and I am delighted to not only see what God is doing at CrossPoint, but to see what God is doing (throughout Eastern Europe). Idaho) in the years to come to help people connect with their goal and the hope it offers, â€he said.

The CrossPoint Community Church is located at 1900 Grandview Drive in Idaho Falls. Services take place on Sunday at 8:30 a.m. and 10 a.m.

Vice President Mr. Venkaiah Naidu Practice your religion but do not engage in hate speech