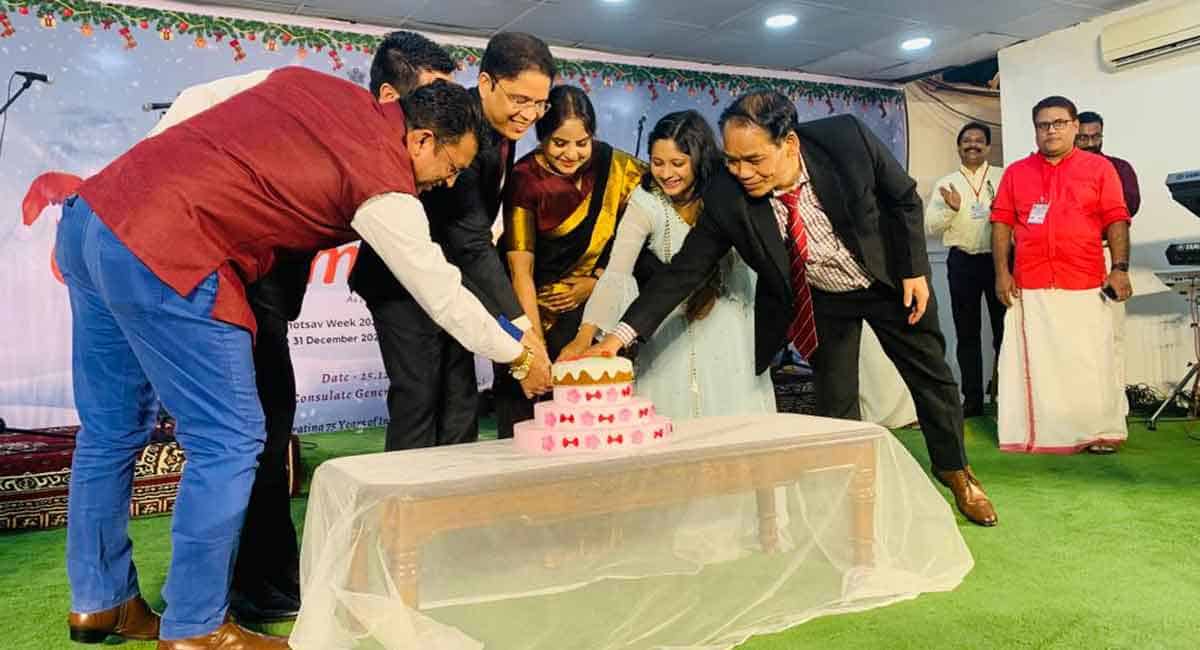 Riyadh: The Indian Christian expat community in Saudi Arabia was overwhelmed and excited this time around when Christmas in Saudi Arabia this year turned out to be different from the previous ones as the small but powerful professional community became part of Azadi Ka Amrut Mahotsav . They came in large numbers to celebrate the feast.

For the first time, the Indian Christian community in Saudi Arabia celebrated Christmas at the Indian consulate in Jeddah as part of Amrut Mahotsav week. Worshipers, some from remote areas, were elated when they witnessed a Santa Claus parade supported by a drum corps, marching band and cheerleader team.

The cultural programs presented by different prayer groups delighted the audience. The birth of Jesus, the nativity scene and other cultural performances at the Syro Malabar Church in Jeddah fascinated people of all faiths.

Some prominent festivals of other faiths are celebrated in diplomatic missions as community functions.

Christmas in India is a beautiful holiday and Christians celebrate it from the land of God, Kerala, to the east of India, rich in cultural diversity. All of these different groups were represented at the event.

He said that whenever he visited different provinces and met senior Saudi officials, they all praised the hard-working Indian community, especially the nurses. The senior diplomat added that nurses working with different patients were a test from God that made such a positive difference.

â€œI used to attend Christmas functions at Pakistan Consulate every year and obviously felt different, but for the first time participating in our own mission my joy was doubled,â€ Vardhanapu said. John, originally from Panjesha Wali in Hyderabad and longtime resident if Taif who came to join the event.

The celebration of Christmas by Indian expatriates was the concept of dynamic young diplomat Md. Shahid Alam. Celebrating Christmas as a community event in a place like the Indian Chancellery in Saudi Arabia was unimaginable until some time ago. In the past, there have been cases where Christmas Day celebrations were prevented and participants were arrested.

It can be noted that in 2014, 28 people including Indian women and children who gathered in the Eastern Province were arrested by the police.

However, sweeping changes in Saudi Arabia and the support of young diplomat Shahid Alam made it possible this year.

During a historic visit to the Coptic Orthodox Church in Cairo in 2018, Saudi Arabia’s Crown Prince Mohammed bin Salman met Pope Tawadros II, the leader of the Coptic Christians. He was welcomed to Saudi Arabia around this time. He also hosted and met with Christian leaders late in Riyadh.

For two years, some stores in major cities have been selling Christmas trees and other decorative items, according to media reports.

The drastic change brought immense joy among the roughly 18 Lakh Christians living in the kingdom, the majority of whom were from Kerala and the Philippines in India. Expatriates Christians who have always had the freedom to practice their faith and rituals privately looked forward to large-scale celebrations like any other.

Indian Christian expatriates constitute a significantly dominant section in the health field and are known for their quality patient care and praised for their commendable service.

The majority of Indian Christians in Saudi Arabia are from the districts of Kottayam and Alappuzha in Kerala, where the history of Christianity dates back almost to the time of Christ. Saint Thomas, the apostle of Jesus, arrived in 52 AD in Kerala and baptized the inhabitants.

The Indian Christian Community (ICC) which includes different Christian groups organized the event with the support of the Indian Consulate.

Also in Riyadh, a similar function took place at the Indian Embassy. A few dozen Indian families participated in the event despite the cold, according to the organizers.

Ms. Saroja, from Hyderabad, played a key role in organizing the event in Riyadh.

Now you can get handpicked stories from Telangana today to Telegram everyday.