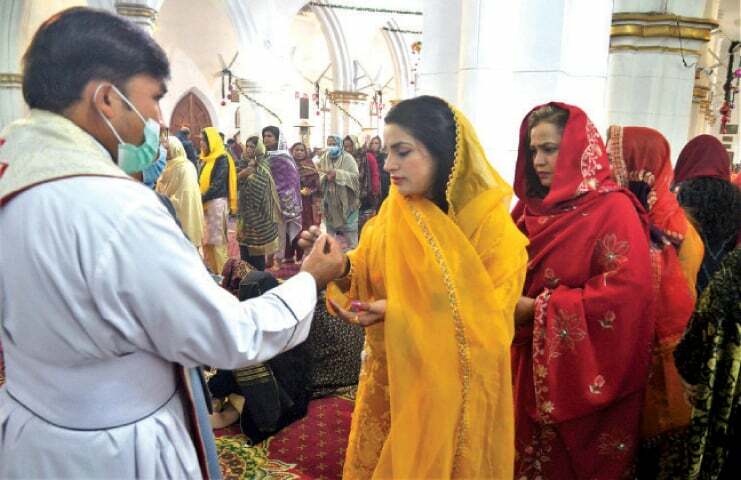 PESHAWAR: The Christian community celebrated Christmas with religious zeal in different parts of Khyber Pakhtunkhwa amid heightened security during mass service in churches on Saturday.

The police were on high alert and security measures were taken outside churches.

Members of the Christian community greeted each other and religious gatherings were held in various locations.

In Peshawar, churches were decorated and community members, including women, offered special prayers for the country’s development and prosperity.

Offer special prayers for the prosperity of the country

According to people in the community, the Christmas festivities began with the midnight services where the faithful offered prayers for the peace and stability of the country.

In addition to the cake-cutting ceremonies, community members exchanged gifts. During the ceremonies, the spacious halls of the churches echoed with a choir of hymns and Christmas carols and the attendees enjoyed the moments.

Christmas was celebrated in some forty churches in the provincial metropolis. The main gatherings were in All Saints Church, Saint Joseph Catholic Church, Cathedral Church and Saint Michael Catholic Church, which were fully illuminated.

Members of the community gathered in their places of worship also offered special prayers for those who lost their lives in terrorist attacks, especially those who were killed in the suicide bombings inside the All Saints Church at Kohati Gate in 2013.

The biggest Christmas mass was held at St. John’s Cathedral where Humphrey Sarfaraz Peters, the Bishop of Peshawar, led the main congregation. The Kohati All Saints Church congregation was headed by Father Shehzad Murad. They preached interfaith harmony and peaceful coexistence.

â€œWe usually start Christmas preparations in early December. Our people enthusiastically participate in the decoration of places of worship as a religious obligation, â€said the participants.

Some attendees from a church in Swati Gate told this correspondent that community members visited relatives and friends and entertained guests in their homes with different foods prepared especially for the day.

Regarding their demands, the people urged the government to provide financial support to bereaved families and survivors of the bombings.

In Charsadda, Christmas was celebrated in Shabqadar with a cake-cutting ceremony and people offered prayers.

Likewise, the Pakistan Muslim League-Nawaz held a cake-cutting ceremony at its provincial secretariat in Peshawar on Saturday. In addition to Provincial President Amir Muqam, a number of senior officials and elected officials attended the ceremony.

They also celebrated the birthday of the founder of Pakistan Quaid-i-Azam Muhammad Ali Jinnah.

Muqam spoke about the importance of the day, saying his party is fully committed to following the mission of the founder of Pakistan despite many difficulties.

In Bajaur, the feast of Christmas was celebrated with religious zeal on Saturday.

The newly elected chairman of Khar village council, Haji Anwar Hussain, was the guest of honor on the occasion.

Religion and traditions come in many forms