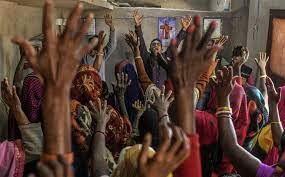 Amid growing attacks on minorities across India, Christians have resorted to clandestine religious gatherings and secret baptisms due to fear of Hindutva crowds.

Telling the story of his ordeal, Pastor Manish David to Indore told an English daily that a swarm of saffron-clad men had infiltrated inside. They jumped on stage and shouted supremacist Hindu slogans. They hit pastors in the head. They threw women to the ground, sending terrified children scurrying under their chairs.

â€œThey kept beating us, pulling our hair,â€ said David, who was also assaulted. â€œThey shouted, ‘What are you doing here? What songs do you sing? What are you trying to do? ‘”

The attack took place on the morning of January 26 at the Satprakashan Sanchar Kendra Christian Center in the city of Indore.

â€œPastors organize underground ceremonies at night. They organize secret baptisms. They distribute audio Bibles that look like little transistor radios so that illiterate farmers can listen to the scriptures surreptitiously as they plow their fields, â€local media reported.

According to a report by the human rights group, more than 300 attacks on Christians took place in the first nine months of 2021, at least 32 of them in Karnataka. But only 30 FIRs have been registered so far in these cases.

The report mentions that September alone recorded 69 such incidents, followed by 50 in August, 37 in January, 33 in July, 27 each in March, April and June, 20 in February and 15 in May.

At least nine Indian states have anti-conversion laws in place, including Chhattisgarh, which activists say has become a “new laboratory” for anti-Christian hatred in India.

On November 28, 2021, a newly inaugurated church in Delhi faced disruption and vandalism during its first Sunday service when members of a militant Hindu nationalist group called the Bajrang Dal stormed the meeting.

The United States Commission on International Religious Freedom, a government agency, has recommended that India be placed on its Red List for “serious violations of religious freedom.”

The report also recommended that Washington impose targeted sanctions on individuals and entities responsible for serious violations of religious freedom by freezing the assets of such individuals or entities and / or prohibiting their entry into the United States.

Despite India’s constitutional protections for religious freedom, about a third of India’s 28 states limit or prohibit religious conversion to protect the mainstream religion from perceived threats by religious minorities.

These anti-conversion laws are too often the basis for false accusations, harassment and violence against non-Hindus that occur with impunity.

In many cases, authorities have failed to prevent such abuses and have ignored or chosen not to investigate the perpetrators’ calls for accountability.

On October 21, the Association for the Protection of Civil Rights, United Against Hate and United Christian Forum jointly released an investigative report highlighting the series of attacks on churches and hate speech against Christians across India.

The British transformed India from a caste-based ecosystem to one based on religion, and drastically changed everything: Devdutt Pattanaik