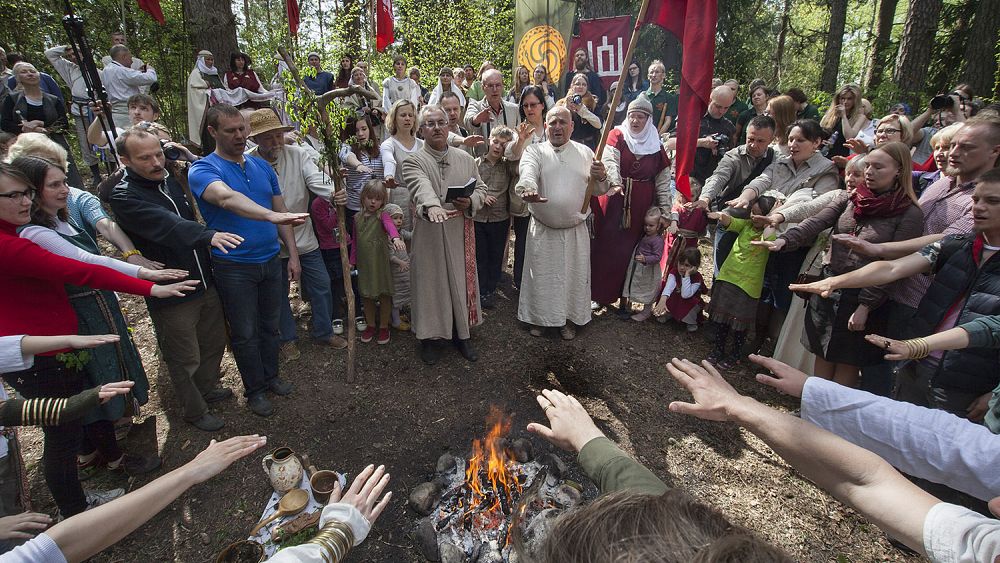 In 1973, Jonas TrinkÅ«nas, a lecturer who studied folklore and traveled to Lithuania to collect folk songs and cultural practices, was dismissed from Vilnius University for dissident activity.

Six years earlier, the scientist and his companions had organized a â€œRasaâ€ ceremony in the former capital of the Grand Duchy of Lithuania, KernavÄ—. The group lit ceremonial fires on a stone altar, sang folk songs and made offerings to gods and goddesses, angering the KGB.

â€œIn Soviet times, you couldn’t say that you were praying to the gods,â€ says Inija TrinkÅ«nas, TrinkÅ«nas’ wife, from her apartment in Vilnius.

“We couldn’t officially declare it but we as friends arranged our spaces and we celebrated festivals and so on.”

Inija TrinkÅ«nas is the Kriv, or high priestess, of the Romuva faith; a neo-pagan group created in part by her husband.

In 2011, there were around 5,000 Romuva followers in Lithuania, with 25 groups in different locations across the Baltic nation.

Our interview with Inija TrinkÅ«nas took place on the morning of December 7, the day a debate on state recognition of Romuva was due to take place in the Lithuanian parliament, Seimas.

The High Priestess and the rest of Romuva’s followers would win this vote by 41-18.

The Romuva struggle through history

Lithuania was the last pagan nation in Europe, with most of the remaining Baltic pagans converting to Christianity after the establishment of the Commonwealth of Poland-Lithuania in 1569. Prior to that, many Prussian pagans had been killed or forced to convert by the savage Teutonic Knights.

Then, in the 19th century, many Lithuanians began to look to their cultural past to forge a sense of national identity.

â€œAttempts to restore the old faith began at the end of the 19th century and the beginning of the 20th century. Some famous people, famous artists and so on have said so, â€says TrinkÅ«nas

The revival was crushed by the Soviet occupation of 1940 when many practitioners were targeted due to the nationalistic nature of Romuva and deported to gulags or killed.

Jonas TrinkÅ«nas’ Ramas celebration took place 27 years after this first wave of repression. He based the rituals practiced by neo-pagan Romuva on the tales and myths he collected during his travels in rural Lithuania.

These traditions which had been transmitted in communities since the adoption of Christianity, and in some cases woven into observations of Catholicism.

TrinkÅ«nas’s work was a significant act of defiance against the domination of the USSR.

â€œIt was both a culture because you felt close to your country and your ancestors, and resistance because it was not allowed to be done publicly,â€ says his wife.

Among the material collected by the researcher during his travels, there were almost a million folk songs. Many of them were recorded by the ceremonial choir, the Kulgrinda, of which Inija TrinkÅ«nas is a member.

â€œWhen you look at the content of these songs, you can see the whole mythology,â€ says TrinkÅ«nas.

â€œWe have songs for all time periods on the calendar. “

Since the rebel Ramas celebrated by TrinkÅ«nas’ late husband, the Romuva now celebrate festivals throughout the year and hold ceremonies for special events like weddings and baptisms. The revival is rooted in the oral traditions of rural central Lithuania.

In 1992, two years after Lithuanian independence, Romuva registered as a religion with the government. Once a religion is registered for 25 years, provided it has a good reputation in society, it can be recognized by the state.

However, the Seimas voted not to recognize Romuva in 2019 after a debate in which followers of the faith were accused of being agents of the Kremlin. The Catholic Church has been implicated in this disinformation campaign, which Inija TrinkÅ«nas described as “humiliation” in the Lithuanian press.

The issue’s return to parliament this week comes after a high-profile case at the European Commission of Human Rights (ECHR). In Romuva v. Lithuania, the court ruled in favor of the pagans and declared that Seimas had violated article 9 of the Convention for the Protection of Human Rights and Fundamental Freedoms; Freedom of thought, conscience and religion.

What future for Romuva?

Soon TrinkÅ«nas and his group will celebrate the winter solstice or â€œthe return of the sunâ€.

â€œIt was a very special time in Antiquity,â€ she says. The Romuva belief is that the sun was made by blacksmiths and is carried by deer antlers; the solstice signals the return of the sun as the days lengthen.

The religious group is also deeply invested in the pre-Christian goddesses. It’s part of a female culture which, according to Lithuanian archaeologist Marija Gimbutas, has proliferated throughout Europe and the Mediterranean.

â€œIt was a woman’s civilization before the arrival of male culture,â€ says TrinkÅ«nas.

â€œMatriarchal cultures have spread all over the world, we are the only ones that survive today. “

But Romuva is also spreading abroad with followers in the UK, US and Australia thanks to the Lithuanian diaspora. Just days before our call, TrinkÅ«nas had attended a ceremony with his daughter in Ireland.

â€œWhen I do the rituals, I feel like I’m in the center of the world and singing songs. I feel in harmony with the people around me, with nature, with gods and goddesses, â€says Kriv.

His commitment to the faith is inspiring, as is the tenacity of Romuva’s followers. After centuries of persecution, this ancient religion has the dignity of being recognized by the state, which they so desperately needed.

Minister of the Interior of Karnataka – The New Indian Express