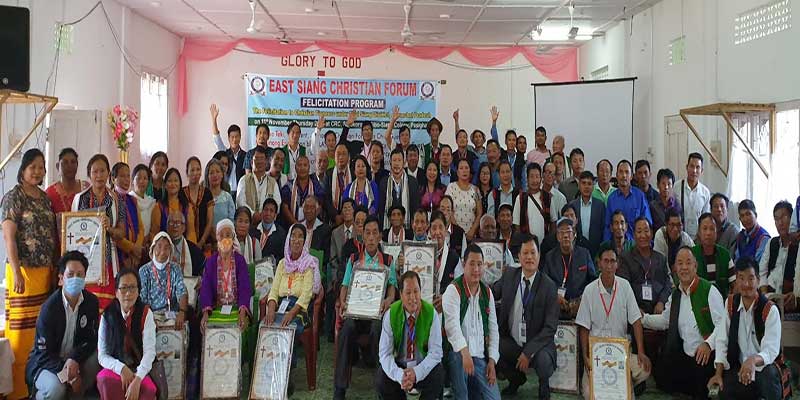 Arunachal: the ESCF congratulates 45 pioneers of the Christian community of various faiths

PASIGHAT (By- Maksam Tayeng) – In an initiative of its first kind among the followers and believers of the Christian community here in the district to recognize the early sacrifices and contributions made by various people who had worked but died and some are still working to bring about changes in people’s spiritual lives through faith in God, a total of 45 pioneers of Christianity of various denominations were congratulated today.

The program was chaired by Rev. John St. Borang as Chairman of the Congratulations Committee and Chairman of ESCF, Taring Tabi and Secretary General, Maktil Apum. In total, 45 pioneers of Christianity belonging to different denominations who led a humble and pious life, in the service of God and of humanity, some of them have already passed away and still others serve the ministry of the Church. under different capacities. The awards ceremony took place under the theme “I fought the good fight, I have the race, I have kept the faith”.

Speaking on the sidelines of the congratulatory program, MP Ninong Ering emphasized the essence of religion and religious life. He also recalled the period of persecution of Christians in the state during the 1970s when he was in civil administration under Govt. of Arunachal Pradesh as an officer of the Circle then. On behalf of Pasighat East MP Kaling Moyong, his wife Kenrik Ete Moyong also shared her experiences of her early education in Christian school.

On behalf of ACF President Toko Teki and General Secretary Tarh Miri, they hailed ESCF’s noble initiative to congratulate the pioneers of Christianity in the district, most of whom experienced difficult times during persecution of Christians in the early 1970s. Both Toko and Tarh urged launching the same congratulatory program in other districts of the state as well.

Reverend Dr Takeng Taggu, Advisor, ESCF shared a short exhortation and Makbul Pertin (IAS, retiree) also led a prayer program as part of the revelation. The program ended with a prayer of blessing from Rev. John St. Borang after a vote of thanks from Singing Moyong, V / P, ESCF.