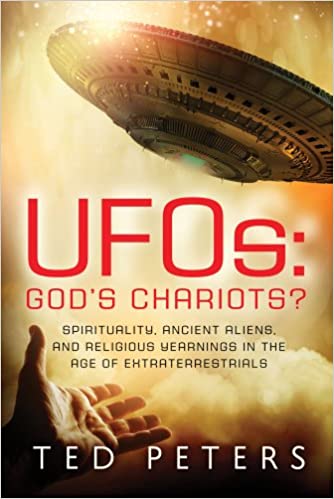 If ET knocked on your door and invited you to an Alien and Terran barbecue, would your religious beliefs face a crisis? Would the religions of the world collapse? My provisional answer is: no! If anything, your appreciation of the magnificence of God’s cosmos would increase.

Why might a public theologian be interested in the UFO phenomenon? For three reasons. First, UFOs are public. They are experienced everywhere by all kinds of people. Second, like a leaking pipeline flooding us with crude, UFOs flood us with religious symbolism. Third, in the form of UAP (Unidentified Aerospace Phenomena), flying saucers are back in religious, academic and government news. [See: “Astrotheology’s Contribution to Public Theology“]

Parliament of the World’s Religions

On October 17, 2021, the Parliament of the World’s Religions sponsored a workshop titled “The Huge Impact of Alien Contact”. Veteran ufologists – Mark Rodeghier, Jerome Clark, David Cherniak and myself – made up the panel. This event featured a new documentary produced for the CBC by David Cherniak, “UFO: The secret story.”It’s an accurate story worth watching.

Yes, singer Demi Lovato is in the news. In the name of political correctness, she complains that the term, “Foreigner” is pejorative to ET. To date, I have not met an extraterrestrial who allegedly claimed to have been discriminated against.

For half a century and more, unidentified aerial phenomena have been studied mainly by benevolent amateurs. CUFO (UAP Study Center) and MUFON (Mutual UFO Network) provided us with the actual X-Files.

What looms on the horizon are new organizations, such as the Scientific Coalition for UAP Studies– composed of scientists who plan to bring instrumental measurements to research. Jensine Andresen and Octavio Chon-Torres are currently editing a new expected book, Extraterrestrial intelligence: academic and social implications. Astroethicists Kelly Smith, Anson Mount and John Traphagen are launching a new research project, “Space exploration, astrobiology and the future of religion”. Academic excitement crosses our intellectual skies like a meteor in August.

harvard astronomer Avi loeb makes the news. He secured funding for high-level research on UAP called the Galileo Project. This includes an investigation of the Extraterrestrial hypothesis (ETH).

On June 25, 2021, Director of National Intelligence Avril Haines shared her intelligence regarding UAPs (Unidentified Aerial Phenomena) with the U.S. Congress: Preliminary assessment: Unidentified aerial phenomena. This empty report contains as much water as a dry Arizona arroyo in August. The report reported that the US government has no information regarding mysterious aerospace objects that are seen by pilots or tracked by radar; handicrafts that break tree branches and leave scorched rings in the ground; non-artisanal apparitions of loved ones who have passed away; and bizarre reports from ETI visitors worrying about the threat of nuclear war on Earth and warning that people on earth are on the path to ecocide. Imagine a student assignment that says, “I don’t know anything about this in particular.

How does the head of American intelligence explain such phenomena? Perhaps, the report argues, these NAPs could fall into one of “five potential explanatory categories: air congestion, natural atmospheric phenomena, USG or US industry development programs, foreign adversary systems. and an “other” catch-all bin. “Or, perhaps” a potential adversary [Russia? China?] has developed a revolutionary or disruptive technology ”(US 2021). I do not know, is the bottom row. Nonetheless, the government report concludes, more “funding” is certainly needed.

Should Americans sleep soundly every night knowing that their safety is in the hands of such a smart intelligence? No serious consideration is given in this report to the Secret Technology Theory or the Alien Hypothesis (ETH). Let’s turn to ETH (Peters, Are UFOs Secret Technology or God’s Chariots? 2021).

My answer here is not to try to fill this blank report with UFO information. I’d rather ask a different question: What would be the impact on religious belief systems if we Earthlings woke up one morning and found ourselves in the company of extraterrestrial neighbors?

Mockers, journalists and some scientists deplore that the Earth religion would collapse under the weight of confirmed knowledge of extraterrestrial intelligence (ETI). Because Christianity and most religious traditions formulated their key beliefs in an old worldview that is now outdated, shocking new knowledge would be dislodge our pre-modern dogmas? Are Earth-centered Christians, so that contact with ETI decentralizes and marginalizes our self-esteem? Make our traditional religions we put human beings at the top of the hierarchy of life, so that if we come across mid-sized companies who are smarter than us, will we lose our top rank? If we are created in the image of God, will we need to share this divine image with our new neighbors in space? In short, the confirmation of the existence of ETI causes collapse of earthly belief systems? What if earthly religious belief systems collapse, will theologians find themselves out of work?

To answer these questions, let’s look at some data and then look at some theology. First, the data. With the help of a former student assistant, Julie Froehlig, I directed The Peters ETI survey on the religious crisis. That is, I asked people about their faith. It’s a good source of data, isn’t it?

Question 3 of the survey is very informative. Here it is: “The official confirmation of the discovery of a civilization of intelligent beings living on another planet would undermine my beliefs so much that my beliefs would face a crisis. Almost no one checked Agree or Strongly agree. Over 90% of the responses disagree or strongly disagree. This is the case for Evangelical Christians, Fundamentalist Christians, Roman Catholics, Mainline Protestants, as well as self-identified Buddhists, Mormons and non-religious. In sum, believers in all the religious traditions tested claim an integration of new knowledge regarding ETI (Peters 2008) (Peters, The implications of the discovery of extraterrestrial life for religion 2011).

Enter: astrotheology. Astrotheology is that branch of theology which provides a critical analysis of contemporary space science combined with an explanation of classical doctrines such as creation and Christology with the aim of building a complete and meaningful understanding of our human situation in a surprisingly immense cosmos (Peters , Introducing Astrotheology 2018, 11-12).

Here is an astrotheologian worthy of attention: David Wilkinson. Wilkinson is a Methodist astronomer and theologian.

Wilkenson does not believe Earth is visited by aliens piloting flying saucers. Still, he supports SETI (Search for Extraterrestrial Intelligence) and other scientific work in the hopes of meeting new friends living on exoplanets. This is important for Christians, he said, because we must appreciate how vast God’s creation is. “Human beings are not the center of the universe. In fact, it is the human belief that we are the center of all things that the Bible calls sin … God is the center of all things, and we are creatures endowed with status through his love ”(Wilkinson 2013, 148 ). By decentring on Earth, we can better appreciate our humble place in the beautiful cosmos of God.

But, aren’t aliens sent here by Satan? These friends of yours who tell you this are very few. If they’re harassing you, tell them to back off. But of course with “gentleness and respect” (1 Peter 3:15) (Peters, Reasons for the Hope Christians Have 2021).

One incarnation or several?

In a future Patheos column, I hope to address a thorny question: if outer space is populated by races of intelligent beings, would each extraterrestrial civilization justify its own Christ incarnation or the incarnation of Jesus on Earth would suffice? it to the cosmos? Think about your answer. Then read a future article on “One incarnation or several?

Ted Peters (Ph.D., University of Chicago) leads traffic at the intersection of science, religion and ethics. Peters is Professor Emeritus at the Graduate Theological Union, where he co-edits the journal, Theology and sciences, on behalf of the Center for Theology and the Natural Sciences, Berkeley, California, USA. With Martinez Hewlett, Joshua Moritz and Robert John Russell, he co-edited, Astrotheology: science and theology meet extraterrestrial intelligence (2018). With Octavio Chon Torres, Joseph Seckbach and Russell Gordon, he co-edited, Astrobiology: science, ethics and public policies (Scriver 2021). He is also author of UFO: the chariots of God? Spirituality, Ancient Aliens, and Religious Aspirations in the Age of Aliens (Career Press New Page Books, 2014). See his website: TedsTimelyTake.com.

Give us more: DePaul demands religion but lacks interreligious courses, several religions are not represented in the courses