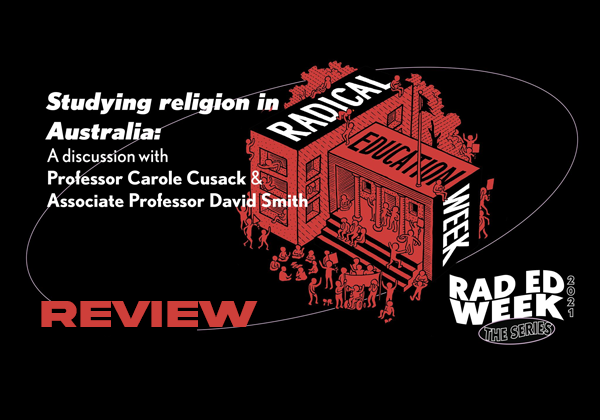 After a bitter struggle to save the Department of Religious Studies from the closure of the University of Sydney, students and staff have won. However, the future of some religious studies units is still uncertain. As part of the Radical Education 2021 series, Study religion in Australia discussed the perspectives of discipline and religion in Australia. The event began with a heartfelt tribute to Alana Louise Bowden, a recently deceased student and staff member, whose efforts and role helped save the department.

Moderated by Religious Studies Graduate Ranuka Tandan, the discussion featured David Smith, Associate Professor of American and Foreign Policy, and Carole Cusack, Professor of Religious Studies. He examined the importance of the discipline, why it is undervalued and the connection between religion and politics in Australia in relation to the world, and how it is treated in the context of higher education.

After the appointment of Dominic Perrottet, a self-proclaimed “conservative Catholic”, as Premier of New South Wales, the discussion has raised questions as to whether Australia is particularly good at separating the church and the state.

In Australia, a lack of understanding of different religions shapes our views and, ultimately, media reporting. Although it is assumed that Australians are quite lax when it comes to religion, this is hardly the case, according to Cusack. She suggested that religion is often codified as what is acceptable and what is not, leading to assumptions about particular ethnic groups and the religions associated with them. This is particularly the case since September 11, when communities believed to be Muslim were seen as a threat and saw their places of worship attacked.

Although many do not view Australia as a Christian country, Smith argued that nationalism is often equated with a particular religion and this is reflected in other countries as well. He pointed out that, in the case of Australia, an attack on Christianity is seen as an attack on the nation. Ultimately, the “separation of church and state does not mean the separation of religion and politics.”

The discussion also shed light on why secular religious education in Australia is so underrated. This can in part be attributed to the fact that departments such as religion studies at universities remain small and have had little opportunity to expand. Students who study religion in high school very rarely pursue it to college. On the other hand, secularism and secular society tend to view religion as seemingly unimportant without needing to understand or know more about it, except in the case of certain events of widespread interest. Smith noted that despite secularism’s assumption that religion was going to disappear, religion evolved, taking new forms, while some religions completely disappeared, and even the way people experience religion completely changed.

Despite the success of students and staff in saving the department, the fate of Studies in Religion, and many others like it, is still on the line. Looking back on the larger campaign against cuts in the arts, Cusack said there had been numerous attempts by university management to cut the discipline and ongoing negotiations were still ongoing.

Studies of religion as a discipline gained prominence after 9/11. Cusack and Smith both stressed the importance of discipline in enabling us to understand what religion really is. As Smith suggested, it plays a vital role in helping us understand the complex interplay of religion and the world.

As religion continues to influence Australian politics at all levels, understanding religion and preserving religion studies as a discipline remains crucial for the future.