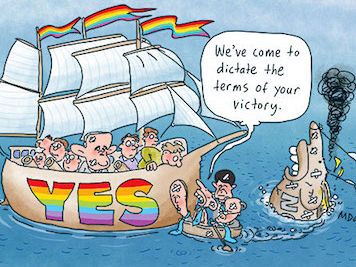 Noon in the Christian religion

“This is the privilege of religious conservatives, they feel that disagreement with their beliefs amounts to persecution… Being white, privileged, Christians and largely male, they can, unlike the truly persecuted, go anywhere at all moment – probably on a business class trip. ‘

WHEN I ticked ‘Yes’ in the despicable Postal Opinion Poll on Marriage Equality – which we all went through because Prime Minister Malcolm Turnbull didn’t have the courage to address it in Parliament and, instead, outsourced the decision in an attempt to appease his party’s right wing – nowhere on the form did I notice a question about protecting religious freedoms following a “Yes” victory. “.

And yet the right has assumed the mandate to demand amendments to the Marriage law which have nothing to do with marriage equality and are, for the most part, covered by our anti-discrimination legislation which inexplicably already gives religious institutions the right to discriminate against other human beings.

Treasurer Scott Morrison seized the opportunity flaunt his leadership credentials by demanding that parental rights and “protections of conscience” be included in the marriage bill and that the “”very basic questions of faith and beliefAre adequately covered. Morrison is a Pentecostal Christian.

Fortunately, anti-discrimination exemptions are not extended to organizations or individuals other than religious.

It remains a mystery to this writer that:

a) religious institutions must be discriminatory;

b) they are not required to pay taxes; and

Why do we even tolerate Senate debates on the nature and extent of the proposed “protection of religious freedoms” and why do we not instead question the very existence of this concept in our secular parliament?

Our Constitution covers the issue of religious freedom. I have seen sensible questions about the amendments being proposed now before the Senate which suggest that they might, in fact, violate the Article 116 of Australian Constitution Act, which states:

“The Commonwealth will not make any law to establish a religion, or to impose a religious practice, or to prohibit the free exercise of any religion, and no religious test will be required as a qualification for office or public trust in the Commonwealth. ‘

Hopefully, protecting religious freedom will be the next challenge before the High Court. Crowdfunding, are you interested?

Matt Canavan says he will fight so Tories do not become a “persecuted minority” https://t.co/7rQLcKVp0l

2. “There is no other country to flee if we lose”

If you were to assume that the above quote is a heart-wrenching lament from the men currently undergoing inhumane treatment on the Isle of Manus, you’d be wrong, although understandable that is.

In fact, it is a quote from a wish of the Federal Minister of Adani, Senator Matt Canavan, To “To fight so that the Conservatives do not become a persecuted minority“ display the voters’ decision in favor of marriage equality.

The persecuted Christian trope is nothing if not persistent. A quick look at the Twitter timeline of the Australian Christian lobbyCEO of Lyle sheltonreveals a man drooling with anticipation of persecution – his pathological desire for martyrdom may remain unfulfilled even if we send the lions.

An unintended consequence (?) Of the Marriage Equality Opinion Poll is the opportunity it provided for the conservative religious cohort to come together and come together in their sense of unfair exclusion from the views of the majority of Australians. Religious conservatives have long promoted the idea that they are the “silent majority”.

The “Yes” result apparently catapulted them from their status as a silent majority to that of a persecuted minority, literally overnight. Immediately after the announcement of the “Yes” result, we see Shelton hosting a conference called “Embolden17», During which various homophobic leaders, such as Senator Cory bernardi, gave speeches intended to stoke the fires of fear and resentment, and to consolidate the sense of attachment caused by an imaginary threat of “losing” and subsequent flight from persecution. Just like Moses parting the Red Sea and leading the Israelites out of Egypt just before receiving the Ten Commandments.

The end of time, baby. Embiggen me.

This is the privilege of religious conservatives, they believe that disagreement with their beliefs amounts to persecution. Given that several of them are members of a government that is currently torturing refugees in detention abroad, their allegations of persecution and potential statelessness are nothing more than revolting and hysterical self-dramatization. Being white, privileged, Christian, and largely male, they can, unlike the truly persecuted, go anywhere at any time – possibly in business class.

On the flip side, most Western countries have already legalized marriage equality, so if that’s what they’re trying to avoid, their options are limited.

“There is no other country to flee to.”

3. The divisions within the Christian religion run deep, so on which side is God?

This passionate piece through Julia baird in the Sydney Morning Herald, ” Same-sex marriage results was a defeat for one type of Christianity ”, reveals the depth of disagreement among Christians on the subject of marriage equality. Baird opens his room with the question: ‘Who speaks for God? ‘

Because I find the concept of the male Christian god utterly baffling, I find the argument about who speaks for him on the civil and secular issue of marriage equality both bizarre and irrelevant. Christians do not and have never had ownership of marriage. And while, as Baird points out in his article, the aforementioned Australian Christian lobby may not speak for many Christians, the Anglican Church, which has donated $ 1 million to the “No” campaign. , certainly does. Not to mention the Church of Rome – vocal and insistent in its plea for what it is calls, “Marriage between a man and a woman”.

The regular devotees, Baird asserts, disagree with their hierarchies, however, as there is no data available on the number of practicing Christians who voted “yes,” this claim is as unfounded as that of Paul Bongiornorecent surprising tweet from, in which he states:

‘On second thought, it’s sad that the ethnic minority communities of western Sydney – victims of discrimination and prejudice – are unable to extend equality to the queer minority. Out of sync with the nation.

As Twitter was quick to ask, where did this data come from, and who exactly did an analysis of it that might lead to this crude conclusion? It was a voluntary postal opinion poll, without the usual guarantees of inquiry, neither a referendum nor a plebiscite.

On second thought, it is unfortunate that the ethnic minority communities in western Sydney – victims of discrimination and prejudice – are unable to extend equality to the queer minority. Out of sync with the nation.

Let us also not forget that the “No” campaign was led by the very people identified in Baird’s article – none of whom match Bongiorno’s profile of members of the ethnic minority communities in western Sydney. Most of these leaders, I am prepared to support him, have never experienced serious discrimination and prejudice like the refugees from West Sydney who fled their home countries to escape.

To mine, the religious divisions that Baird addresses in his article have little place in public discourse on marriage equality. Surely they can sort it out among themselves – and if they can’t, they can still pray. Equality in marriage is a matter of human rights, not a matter of religion. The point about freedom of religion is that it is about the freedom for religious to practice their faith: it is not the freedom to impose this faith on everyone.

Religious interference in our secular state is so normalized that our Senate debates protections for religious freedom which, if passed, will inevitably discriminate against someone and our media provide platforms for religious sects. at war who argue over which of them speaks in the name of the god. they share. It is noon hour in the Christian religion. Pass the popcorn.

I have no problem with religious people who believe what they want to believe. I have no idea why they can’t do their thing happily, without feeling like they have to force this thing on everyone. It is a secular country. We must not bow to religious exceptionalism. Christians have the right to vote, like everyone else. That should be the extent of their influence over government. Our Constitution calls for the separation of church and state for very good reasons.

Modify the Marriage law it couldn’t be simpler. Former PM John howard did it in 2004 no problem. We can do the same.

You can follow Dr Jennifer Wilson on her blog No room for sheep or on Twitter @NoPlaceForSheep.

This work is under license Creative Commons Attribution-NonCommercial-NoDerivs 3.0 Australia License

Australia votes YES: love is in the air, but is marriage equality? https://t.co/nNR2PmbqOQ @ IndependentAus

#QandA
If the baker is gay, the icing maker is Christian, the candle maker is the most atheist, will the Woolies be allowed to boycott the sale of the cake?

Impurities in our Christian religion

Sessions and Sanders radically depart from the Christian religion